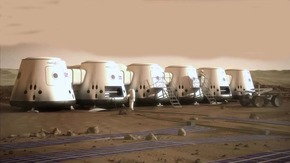 Want to spend the rest of your life on Mars? The Mars One initiative plans to establish a permanent settlement on Mars in 2023 and is looking for future astronauts. No experience necessary.

Bas Lansdorp, co-founder and CEO of the Netherland based group says, «It will be the biggest media spectacle the world has ever seen.» But there is a catch, this trip is one way only. The total budget is 6 billion dollars and Mars One has to fund the project by producing a reality TV show - live coverage of the mission which will be broadcast around the world. The initiative is one of love and hate, admiration and controversy. Mars One has received tens of thousands of testimonials from followers every day, yet at the same time many people around the globe abhor the idea.

The documentary portrays aspiring astronauts from Germany, America, Brazil and Belgium. They talk about motivates them, and about leaving their parents, children and loved ones behind in a mission they cannot refuse.