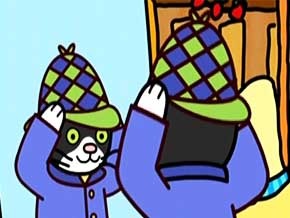 Surprise Party: To make Fudge’s surprise party a complete success everyone stays away from him as much as possible until the party is all ready. Unfortunately, Fudge becomes upset that no one wants to be around him and goes off fishing on his own. It’s up to Gofrette to find Fudge and bring him back…only to discover, “surprise!” …it isn’t even Fudge’s birthday. What do do with all the party plans? If you’re Gofrette and Fudge any party’s better if fishing’s part of it.

Finding Fudge: After watching an exciting detective movie Gofrette and Ellie lose Fudge as they are leaving the cinema. Between dressing up as detectives and finding clues, the two sleuths are at their wit’s end trying to find their missing friend. Little do they know that Fudge has become FudgeBlue, a man of mystery, who wants to find them as badly as they want to find him.