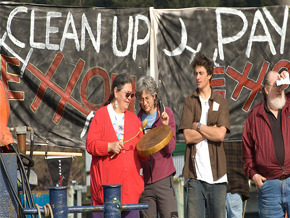 Black Wave: the Legacy of the Exxon Valdez

Twenty years after the Exxon Valdez oil spill, marine biologist Riki Ott and the fishermen in the town of Cordova, Alaska remind us that the biggest environmental catastrophe in North American history is still with us. Over time, its consequences have become all the more apparent and painful. The spill has profoundly altered the lives of tens of thousands of people, reducing them to poverty and despair.

On March 24th 1989, shortly after midnight, the supertanker Exxon Valdez ran aground in Prince William Sound, a pristine area immensely rich in marine life. A significant part of the crude oil carried by the tanker spilled into the sea. An enormous, gooey black wave swallowed 2,000 kilometers of wild beaches that have not been disturbed since the dawn of time.

The media found a culprit, Captain Joe Hazelwood, whose blood alcohol content showed that he was seriously intoxicated. But Hazelwood was a scapegoat who obscured the fact that the accident was preventable. Exxon and its sister oil companies in Alaska have had a long history of breaking safety promises.

Exxon launched a spectacular cleanup operation paired with an unprecedented public relations campaign and came off as a responsible corporate citizen doing its best to repair the damage caused by one irresponsible individual – Captain Hazelwood.

Only when journalists went home did the consequences gradually surface. This environmental disaster created a permanent economic crisis for the fishermen of the Sound. And as bankruptcies began,  a wave of social problems like alcohol, divorce and even suicide engulfed the small towns all over the Sound.

A class-action suit involving 32,000 people seemed to end in a huge victory. A jury ordered Exxon to pay five billion dollars. But battalions of lawyers commanded by Exxon engaged in a drawn-out judicial war that slowed the legal system down to a crawl. When the case finally ended up before the U.S. Supreme Court, it brought the award down to one tenth of the original amount. The decision, a victory for ExxonMobil, constituted a bitter defeat for the people of Cordova.

Black Wave: the Legacy of the Exxon Valdez