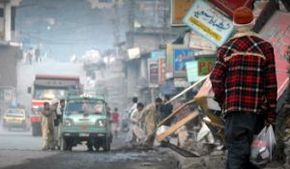 Zalzala: The Pakistan Earthquake is a documentary film about death, destruction, loss, and survival in the face of disaster. This film deals with the aftermath of the most devastating natural disaster in Pakistan's history, the earthquake of October 8 th, 2005. Ultimately it is about the resilience of affected people of the Kashmir region.
This true story came about as a result of a disaster aid worker's need to do more than just practice medicine. In October 2005, Jason Watt found himself in the midst of a disaster zone as an rn/paramedic immediately following the earthquake. In an attempt to raise awareness, through film, about the continuing and long-term suffering facing the affectees, Zalzala: The Pakistan Earthquake was born. In March 2006, Mr. Watt traveled back to Pakistan with five people, including his wife, to the epicenter of the quake to capture the story of the survivors.

Filmed on location in the most highly affected areas, the film recounts the personal stories of dangerous rescue attempts, injuries and amputations of young children, the orphaned and the dead. It also examines facing life in the tented communities, the rebuilding, the resilience of the people and hope for the future.

This project has received extensive support from many people and organizations in Canada, Pakistan and around the world including many teachers and school boards, the United Nations World Food Program, Human Concern International, other governmental agencies, NGO's, and individuals all over Pakistan.