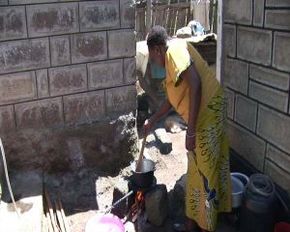 Double Cooked - Jompy Stove (Kenya)
The Jompy Stove is a lightweight and inexpensive stove-top device that rapidly heats water. It sits between a cooking pot and an open flame. Invented by David Osborne, a plumber from Scotland, this incredibly simple technology could save millions who die from drinking contaminated water.

The Jompy is a win-win technology. Householders, in villages where cooking is done over an open flame, can now cook a meal while killing bacteria in dirty water at the same time, thus saving both time and energy.

Gravity pushes the water through the one end of the Jompy and it exits in a boiled state at the other end. It even works on simple three stone fires, making it perfect for use in the bush.

Burn After Eating - Rice husk bio-power (India)
In the state of Bihar in , an estimated 50,000 villagers are lighting up with bio power. Husk Power Systems is using an innovative technology mix to run off-grid mini power stations fired by rice husks - a by-product that would otherwise be thrown away and release methane as it rotted. The company says that the villagers benefit from a clean and safe power source, - especially compared to the kerosene lamps that they are often replacing.

Cell phones are charged quickly and cheaply, improving communications for rural villagers, and lighting is both improving businesses and delighting families. No more excuses for not finishing the homework though!

In A Nutshell - Universal nut sheller (Malawi)
In 2001 engineer Jock Brandis, founder of the Full Belly Project was visiting a friend in Mali in West Africa. On a visit to women's cooperative he noticed that they were still shelling peanuts -- the most important local cash crop -- by hand. A year later he was back with his specially-designed Universal Nut Sheller which helped the women process five times as many peanuts.

Brandis' invention was to be the start of an Africa wide project to promote easy-to-make and easy-to-maintain technologies to improve agricultural output sustainably.