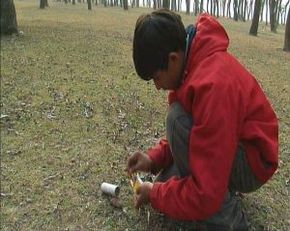 Many children in Kashmir, some of whose fathers have been killed, arrested, or are missing, are forced to help their families survive. One such boy is Aadil, who lives with his parents in an area referred to as the “Gaza Strip” of Kashmir. He collects tear gas shells fired by police at protesters and sells them to a scrap dealer. Because the scrap dealer won’t accept the shells unless they are cleared of the explosive material, he must often remove the detonator and take out the explosives from the shells by hand. There is always the danger of it exploding, but as Aadil says, “I prefer to die bravely collecting shells rather than dying of hunger.”